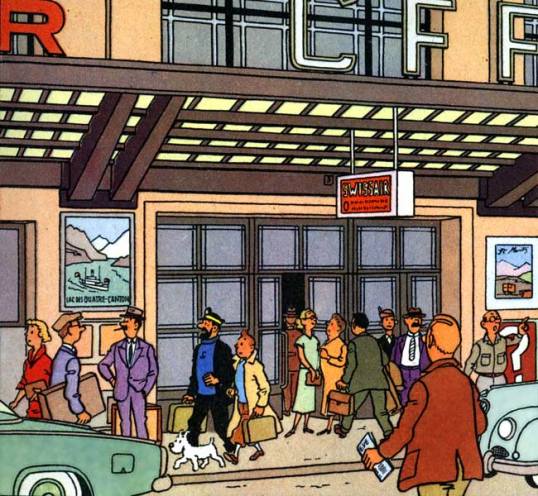 In my last post we saw that Tintin and Captain Haddock found out about Professor Calculus’ laboratory where he was working on a secret sound based technology. Based on their encounter with a stranger in the laboratory, they landed in Geneva in search of Professor Calculus who had gone missing. Outside the airport, Herge has depicted two cars. One was a Studebaker Champion which I described in my last post. The other car was the BMW 501. We can see, by the early 50s, the German economy was on the upswing, as German cars re-appeared on European roads, more and more of these cars were seen in Herge’s renderings. 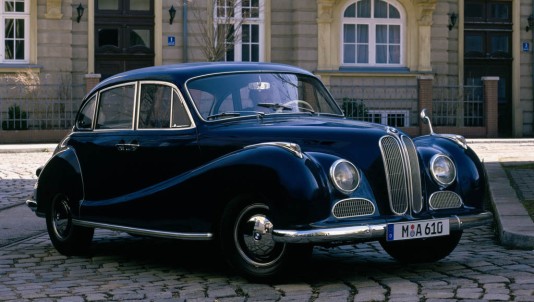 The BMW 501 was the first car to be produced by the Munich based company after World War II. It was showcased at the Frankfurt Motor Show in 1951 and was manufactured from 1952 to 1962. These were large luxury cars and were produced in two versions, the inline six 501 and the V8 powered 502. The 501s were also known as BMW 2600. German public called them the Baroque Angels because of the curvaceous body style. The 501 traces the rags to riches growth of Germany after World War II. If a car wanted to make a mark in this period it had to embody technical progress and provide comfort which would help ease the pain of the years of want that preceded. The 501 offered both. 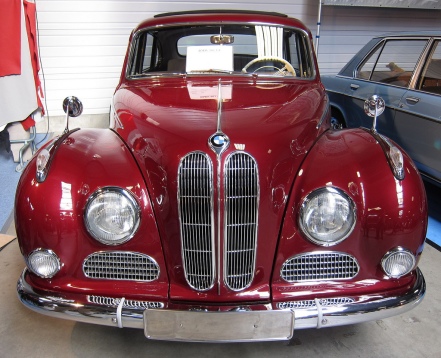 The Peter Schimanowski designed  501 boasted superior fixtures and set the benchmark for all luxury cars of the future that came out of the BMW stable including the present 7 series. BMW had only the bombed out Munich factory to start with. They took the body and engine from the BMW 326 and the frame and gearbox from the still born BMW 332 to start with. The curvaceous body was the result of aerodynamic testing to reduce drag and reduce fuel consumption. 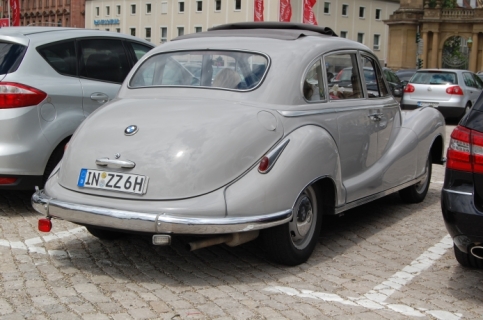 Interestingly BMW’s Eisenach factory was operational at end of war, but it was in Soviet occupied territory. Though this factory started production in 1945, the company was called Autovelo. Notwithstanding, they churned out cars under the BMW name with the Blue and White Logo. This infringement stopped in 1949 when Autovelo changed name to EMW and started using a red coloured version of the BMW Logo. This company later went on to produce the Wartburgs later. 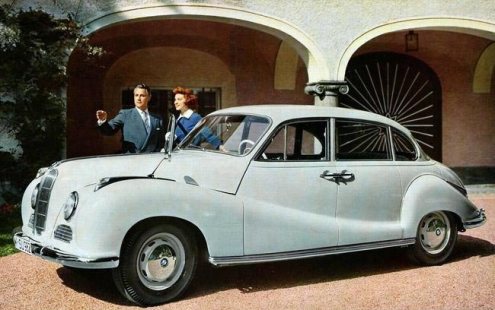 The 501 was powered by a six cylinder inline naturally aspirated petrol engine that displaced 1,971 cc (120.4 Cu-inch). This carburetor engine, breathing through two valves per cylinder produced 71 BHP at 4,400 rpm. It produced 130.5 NM (96 ft-lb) of torque from as low as 2,750 rpm . This power and torque was transferred to the rear wheels through a four speed gear box. Interestingly, the four-speed gearbox was not bolted to the engine, but was a separate shaft-driven unit mounted between the second and third cross-members. This engine could push these 1,725 Kg (3,803 lb) cars to a maximum speed of 145 km/h (90 mph) achieving a 0-100 km/h in a leisurely 21.6 seconds.

They were offered as:- 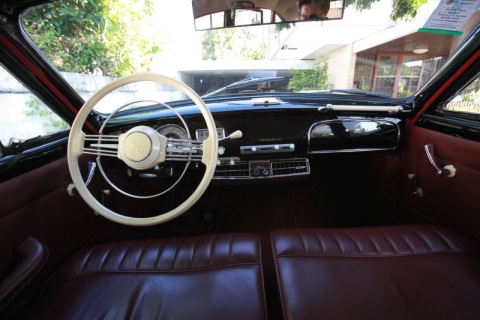 These cars were large at 4,370 mm (186.2 “) long, 1,780 mm (70.1″) wide and 1,530 mm (60.2”) tall.They could seat six people in comfort thanks to the wide front bench seats. The unique separate gearbox arrangement described above helped liberate more space for front passengers inside the car. A lot of attention was paid to passive safety. The 501 had a strong chassis that provided side impact protection better than what was the norm at the time. Suspension was provided by double A-arm front suspension while torsion bar with springs provided rear suspension.  The larger engined 502 came with the world’s first aluminum V-8 displacing 2,580 cc and produced 100 HP.