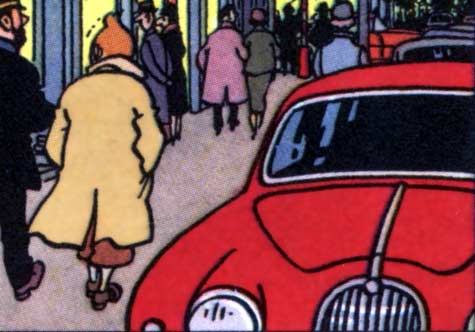 With professor Calculus rescued, our friends Tintin and Captain Haddock returned to Marlinspike in a  Dodge Coronet at the end of “The Calculus Affair”. But Tintin being Tintin, he was soon to proceed on another of his adventures. This time the sea beckoned our old sailor boy and Tintin in the “Red Sea Sharks”.  The book begins with street scene when Captain Haddock and Tintin go to watch a stage performance and find their old acquaintance Gen Alcazar; who had fallen on bad times; performing on the stage. One of the first cars depicted in the book is the Jaguar Mark I.

The Jaguar Mark I was not named thus, but came to known by this name after the introduction of Jaguar Mark II in 1959. The Mark I was manufactured from 1955 till 1959. These cars, while in production, were known as the Jaguar 2.4 Litre and Jaguar 3.4 Litre. These cars were the first small saloons from Jaguar since 1949. These cars were small, fun to drive and quick. These cars had a monocoque body construction, however they were designed to look heavy. The styling included rear wheel spat, small windows, deep side panels and wraparound chrome bumpers.

The cars were involving to drive thanks to stiff body provided by the monocoque construction and their independent suspension. The front suspension comprised double wishbones, coil springs with telescopic dampers and anti-roll bars. The whole assembly was mounted on a separate sub-frame which in turn was mounted to the body using rubber bushes. The car was a rear wheel drive and hence had a live rear axle which was mounted on semi-elliptic springs which were cantilevered into the main body frame. The rear quarter section carried the axle and acted as trailing arms.

These cars were offered only in one body shape and that was a four door saloon. These cars were offered initially with a 2.4 litre engine but in 1957 a more powerful 3.4 litre engine car was introduced specifically for the the US market. When launched, these cars were difficult to lay hands on in the domestic UK market. I shall discuss both the engines separately. These engines drove the rear wheels through a choice of transmissions like a 4-speed manual, a 4-speed manual with overdrive and a 3-speed automatic. Though marketed as small saloons, these cars were pretty large at 4,591 mm (180.7″)long, 1,695 mm (66.7″) wide and 1,461 mm (57.5″) tall. They weighed in 1,340 kg (2,950 lbs).

All this power and speed was controlled using 11.2 ” (284.5 mm) drum brakes on all wheels. However, from 1957 onward disc brakes were offered on all four wheels as an option at extra cost. With such performance on tap these cars were frequently used to race in various rallies, touring car and saloon car races. The drivers included the British Formula 1 legends like Stirling Moss. 3.4 Litre Jaguar Mark 1 won the 1960 and 1961 Australian Touring Car Championships.

3 thoughts on “Jaguar Mark I”