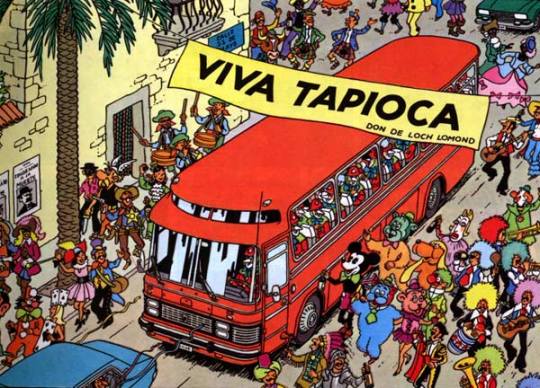 Colonel Alvarez had accompanied Captain Haddock, Tintin and Professor Calculus to pyramids at Hotuatabotl in a Land Rover Series 3. They were forewarned by Pablo. At the pyramid, Pablo helped them escape to the other side and their friend General Alcazar was there to pick them up and help them escape in a Chevrolet 3800 truck. However, it was a conspiracy of General Tapioca and Pablo was actually working for Colonel Alvarez. An ambush was set up by Colonel Alvarez to destroy the escape vehicle using artillery. However, providence saved our friends. They survived in the jungles with General Alcazar and a coup was planned on the day of the carnival. The “Picaros”. General Alcazar’s rebels entered Tapiocapolis dressed as clowns in an orange luxury coach. This coach was a Jonckheere coach built on a DAF 1600 chassis.

DAF was is a Dutch company which was founded in 1928 by Huber Van Doorne. The company was then called the “Commanditaire Vennootschap Hub van Doorne’s Machinefabriek”. The company was started in a brewery owned by the co-founder and financier. In 1932, the name was changed to “Van Doorne’s Aanhangwagen Fabriek” abbreviated as DAF. The company started with converting 4X2 Ford trucks to 6X4 off-roads. In 1949 the company seized the opportunity thrown by a shortage of lorries and buses and started manufacturing lorries, buses and cars. It was renamed as “Van Doorne’s Automobiel Fabriek”, retaining the acronym DAF. It sold the care business to Volvo in 1975. In 1987, it merged with Leyland Trucks of UK. In 1990, DAF Bus was sold to United Bus. The company went bankrupt in 1993 and  new DAF Trucks was formed in Netherlands. The company was later acquired by PACCAR in 1996.

Jonckheere was established in Belgium in 1881 to manufacture horse drawn carriages. The company started manufacturing car bodies for luxury cars in 1902. They built their first bus body in 1922. In the 1930s the company decided to move in full time for manufacturing bus bodies. They were the market leader in Belgium and were fast becoming an important player in the rest of Europe. Jonckheere also seized the opportunity thrown by a shortage of transport services post world war II, building luxury coaches, inter-city buses, transit buses and articulated buses. The company became a part of the Berkhof Group in 1994 and then part of the VDL Groep when VDL acquired Berkhof Group in 1998.

Meanwhile, the United Bus collapsed in 1990 and was acquired by VDL Groep in 1993. Thus DAF Bus and Jonckheere, who started in different countries and collaborated by building buses on DAF chassis were merged under the same group in the 1990s. The Jonckheere SB 1602 had a rear mounted engine and had a a wheelbase of 6.05 meters. They were powered by DAF DS575 turbo-diesels. These engines were inline six cylinder engines and displaced 5.75 litre producing 165 BHP power. These buses were 11.27 m long and 2.5 m wide.They weighed approximately 8.8 tonnes and had a gross vehicle weight in excess of 14 tons. They could seat 50 passengers in luxury.