We were with “The Black Island”. Tintin had taken a train pulled by an SNCF 2D2 9100 electric locomotive. He was attacked and arrested and finally escaped. His adventure took him across the English Channel into United Kingdom. If you observe the details of Herge’s drawings, the colour of the passenger coaches changed to the Brown of British Rail. The shape and the windows are a perfect replication of the coaches used by British Rail. Britain of the 1970s used a large number of diesel-electric locomotives and the same is depicted by a train pulling out of a station with a diesel locomotive at the front. Tintin jumped onto the train in pursuit of his attackers and boarded the last coach. 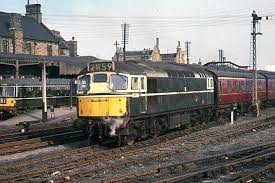 These locomotives remained in service till 1987.