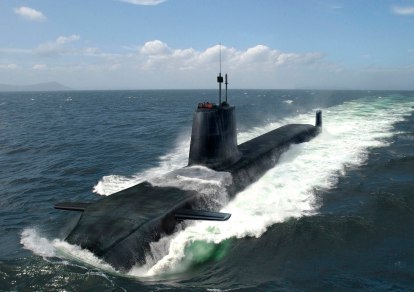 In my last post, I had discussed about the Human Occupied Vehicles used for deep sea exploration. These are manned submersibles which are designed to dive to extreme depths exceeding thousands of meters (tens of thousands of feet). Before I start, lets differentiate between a submarine and a submersible. A submarine is usually a military vehicle. It is manned and carries a suite of weapons and sensors. The vehicles is self propelled and can sustain under water for extended duration of time. This duration may vary from a few weeks to several months. In fact, a nuclear powered submarine can theoretically remain dived for several years or even decades. As a result they have comfortable – compared to submersibles – accommodation. They have life support systems that can sustain for several weeks/ months. Usually submarines do not dive very deep – compares to submersibles again. Their diving depth is determined by the tactical requirements of  naval warfare. They do not have capability to physically observe the environment outside the submarine. They have a propulsion system and usually dive dynamically with speed. They can maneuver between depths and change operating depth as required.

On the contrary, submersibles are used either for exploration and scientific research or for search and rescue for submarines. They are much smaller than submarines and have limited space onboard. They have short endurance ranging up to a few hours and have capability to see the environment outside as well as collect samples from the sea-bed. They are much less maneuverable and dive statically under their own weight. Especially the deep diving HOVs, which we are discussing today, cannot maintain intermediate depths but dive till the sea-bed under their own weight. They have basic propulsion to allow them to move in three dimensions for a limited distance.

So what does an HOV comprise of and how does it operate? An HOV’s structure is open and more akin to a helicopter than an aeroplane, which is closer to a submarine design. An HOV usually has a skeleton structure to which are attached the following: –

The mother ship carries the HOV to the launch site and the crew boards it. The crew usually comprises a pilot and two observers (scientists). The buoyancy tanks or ballast tanks are flooded to make the HOV heavier that water. It is released into the sea and sinks under its own weight till it reached the sea-bed. The depths are such that for a 6,500 m dive, it may take two and a half to three hours to just dive to the bottom. As the HOVs have an endurance between 10 to 12 hours and it takes approximately six hours to dive and surface, they can spend around four to six hours in observation.

The pressures spheres are just sufficient to squeeze in three people and the equipment. There are no seats, toilets or any other such facilities inside, hence they are pretty cramped and uncomfortable 10 to 12 hours spent inside. Once the observation is completed, the ballast/ buoyancy tanks are pumped out to make the HOVs light. The syntactic foam provided in the structure, adds to the buoyancy of the HOV and helps it rise to the surface. Once at the surface the HOV is retrieved by the mother ship on to the deck.

Though most HOVs have a Titanium pressure sphere, new technology like plexi-glass has allowed manufacturing of glass spheres which provide a better view. One US company, Triton even claims to have a glass sphere HOV that can dive to more than 11,000 m (36,000 feet).

This was short introduction to how an HOV operates. Hope it has added some clarity. If you like this explanation, I would be encouraged to post more such posts about how various means of transport work. We can also get into the scientific principals if the feedback is positive.