In my last post we saw that there were gun shots heard on Marlinspike Estate and the Police came to investigate in a Land Rover Series 1. The next day this case was handed over to the two ace sleuths of the Special Branch, Messers Thomson and Thompson. These gentlemen arrived at Marlinspike in the morning in a small car which was very popular as a runabout. It was the Citroen 2 CV.

The 2 CV, meaning “Two Steam Horses” or “Two Tax Horsepower” was conceived in the 1930s by Pierre Boulanger, Vice President of Citroen, as a simple car to replace the horses and carts still used by French farmers. It had a very small list of requirements, the car was required to be capable of carrying four small farmers  and 50 kg (110 lb) of farm goods to market at 50 km/h (31 mph) in clogs and across muddy unpaved roads if necessary. The car had to be simple to run and maintain, robust, cheap to run with covering 100 km while consuming no more than 3 litres of petrol (33 kmpl or 78 mpg) and capable of traversing the not so good roads of 1930s France. 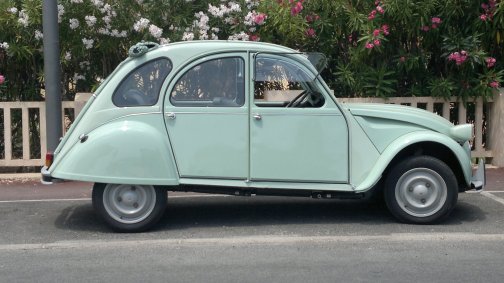 These cars were supposed to be launched during the Paris Motor Show in 1939, the same was cancelled at short notice and the events of World War Two overtook the plans of Pierre Boulanger. The 2 CV was actually launched in 1948. 2CVs were manufactured and sold between 1948 and 1990. In addition to France, they were assembled in Belgium, UK, Argentina, Uruguay, Chile, Portugal, Spain and former Yugoslavia. A total of 3.8 million cars and 1.2 million panel vans based on the 2 CV were produced during its lifespan. 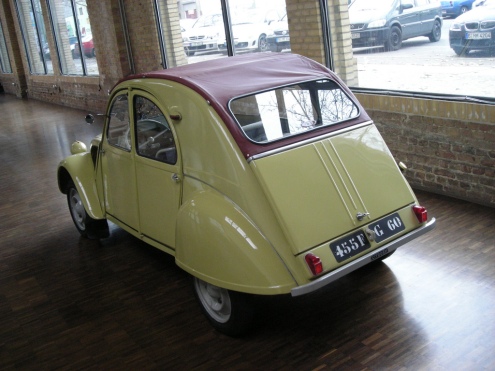 To meet the aforementioned requirements these cars were made of corrugated sheets of steel to maximise strength while minimising weight. Initially they had a canvas sunroof, extending all the way till the rear bumper to accommodate oversize loads. These cars were described as the most original since Ford Model T. 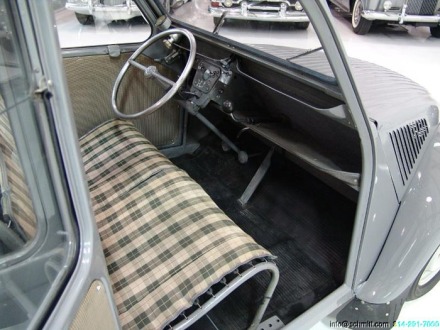 The car seen in the Tintin Book is a 1954 model. These cars were powered by a 424cc (25.87 Cu-inch), naturally aspirated flat 2 cylinder petrol engine which breathed through two valves per cylinder. These engines produced 14 BHP at 3,500 rpm and 24 N-m (17.7 ft-lb) of torque at 2,500 rpm. This puny engine could push the 850 kg car to a maximum speed of 77 km/h (48 mph). The engine power was transmitted to the front wheels through a four speed manual transmission. The actual fuel consumption was 20 kmpl (5 litres/ 100 km). Stopping power was provided by  hydraulically operated drum brakes on all four wheels.

The 2 CV had tiny dimensions, L X B X H (3,780 mm X 1,481 mm X 1,600 mm) (148.8″ X 58.3″ X 63″). Still it could seat four people. It had a 320 litre cargo carrying capacity. These cars were bare bones transportation with no door locks, only Gun Metal Grey body, aluminum coloured wheels and no ignition key. They had flap-up windows, as roll up windows were considered too heavy and expensive. Doors were suicide doors with front and rear doors hinged together. They had one rear light and one stop light. They had four wheel independent suspension, however, the suspensions between the front and rear wheels on one side were connected.

The 2CV was a huge commercial success within months of it going on sale. There was a three-year waiting list for the car and soon it increased to five years. At that time a second-hand 2CV was more expensive than a new one because the buyer did not have to wait to buy one. Citroen had a policy that priority was given to those who had to travel by car because of their work, and for whom ordinary cars were too expensive to buy. Country vets, doctors, midwives, priests and the small farmers were given priority in allocation of cars. The contract between the dealer and the buyer was provisional and the actual requirement was confirmed by the company representatives.