Another unique car depicted in the parking lot of Joylon Wagg’s Vagabond Car Club rally is seen parked just behind the Mercedes 190SL. Seen as a tiny red speck behind the white Mercedes, car number 11, is an open canopy similar to that of an aircraft from World War II. And yes, why should it not resemble an aircraft when it was manufactured by the famed Messrschmitt, which built some of the best and feared fighter aircraft during World War II. The car I am talking about is the Messerschmitt Kabinenroller or Cabin Scooter. 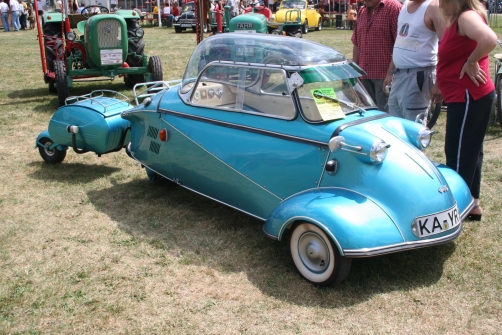 The Kabinenroller was a micro car manufactured by Messerschmitt from 1953 to 1956. The car was later manufactured by Fahrzeug- und Maschinenbau GmbH, Regensburg (FMR) from 1956 to 1964. The cars were initially manufactured as three wheelers, having two wheels in the front and one at the rear. Later a four wheeled version of the car was also manufactured by FMR. These care were assembled in Germany as well as Italy. The Kabinenroller had a monocoque body with a rear mounted engine which drove the single rear wheel. It had tandem seating with the driver sitting in front and the passenger sitting behind, as in any scooter. However, to provide protection from the elements, it was  usually provided with a bubble canopy. 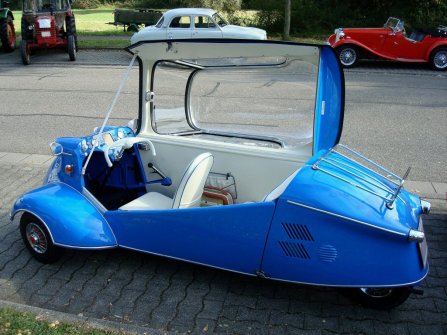 This car was designed by Fritz Fend, an aeronautical engineer and a technical officer in the Luftwaffe. He had designed a number of powered and unpowered vehicles for the physically challenged. His designs had culminated in the Fend Flitzer, which was a powered vehicle designed for the physically challenged. However, he realised that a number of able bodied people were buying the Flitzer as a personal transport. That is the time it dawned on him that there may be a market for a small two seat runabout. His efforts culminated in the Kabinenroller which Messrschmitt agreed to build. The first car, the KR 175 was launched in 1953. A bigger engined and improved KR 200 was launched in 1955. 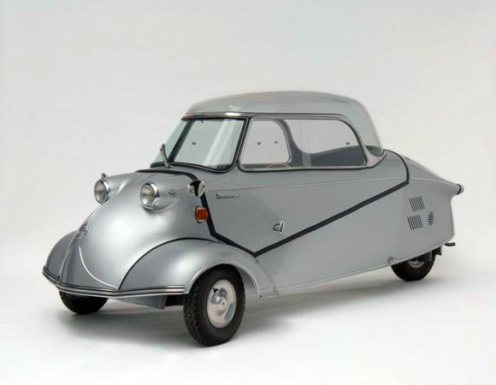 The Kabinen roller was a three wheeled vehicle on a monocoque chassis. The rear end of the chassis acted as the firewall and the engine cover was installed here. Beneath the engine cover was a subframe that mounted the engine and the rear suspension. The fuel tank was placed in the top of the engine cover and fed the carburetor under gravity. The engine was started by a pull rope and an electric start was offered as an option till 1954. Thereafter, the electric start was offered as standard equipment. The bubble canopy was riveted to the right side of the monocoque and provided access to the interiors. The Canopy comprised plexiglass top as well as a glass wind screen with a manually operated wiper. Sliding windows were provided on the sides for ventillation. Later a convertible and a an open top sport version were also offered. Front suspension comprised a transverse lower arm sprung by a torsional 3-element rubber spring at the inside end while the rear suspension was by a trailing arm similar to a single-sided motorcycle swingarm. Drive to the rear wheel was provided by  a chain drive. This car did not have a steering wheel but a steering shaft, similar to the handle bar of a scooter. It was connected directly to track rods controlling the front wheels. 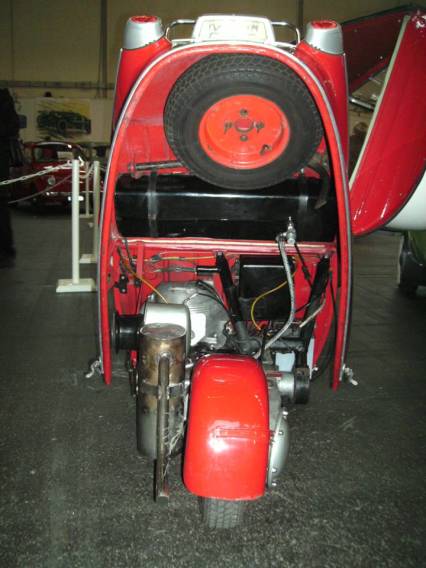 In 1955, a special KR 200 was built. It had a tuned engine, revised gear ratios, redundant control cables, a streamlined body.However, it retained stock brakes, steering, damping and suspension. This modified KR 200 was tested for 24 hours at the Hockenheimring. The result was 22 world records for a three wheeled vehicle with an engine less than 250 cc on a closed circuit. These included a 50 mile record at 107 km/h (66.5 mph) and a 24 hour record at 103 km/h (64 mph). As the German economy grew and Messrschmitt was permitted to build aircraft, they sold the business back to Fritz. Later with the advent and increasing popularity of the VW Beetle and the Mini, the lost business and production was finally stopped in 1964.