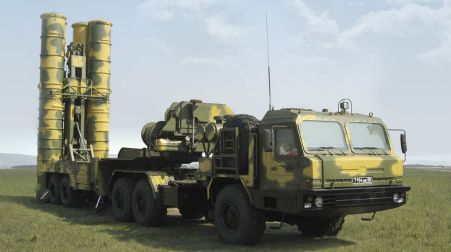 “S400 Triumf” is a Russian Air Defence System. This system is a successor of the S300 system and was  inducted into the Russian Armed Forces in 2007. S400 is an integrated system with a multi-function radar,  autonomous detection and targeting system, anti-aircraft missile system, launchers and command and control system. It is capable of engaging a wide range of aerial targets like aircraft, UAVs, ballistic as well as cruise missiles at ranges varying from 400 km to 30 km. Each system is capable of engaging 36 targets at a time. This makes it one of the most potent air defence systems in the world. However, to move and deploy this system, it uses several heavy duty off-road vehicles like: – 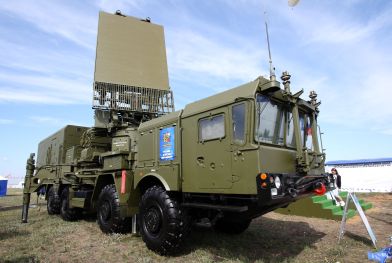 MZKT is a Belarusian heavy truck manufacturer based out of Minsk. Its civilian trucks are branded as “Volat”  which is Belarusian for Giant. They specialize in manufacturing heavy equipment for military, oil and gas, cranes and other special purposes. The MZKT 7930 was developed by the company in the 1990s and was first introduced into the Russian Army in 2000. These trucks are built especially for Russia as Belarus does not have requirement for such trucks for their army. The 7930 is an 8×8 vehicle with cab for seating 3 people. This vehicle is frequently used to mount various weapon systems and is primarily designed for off-road applications. The vehicle cab can be provided with armoured protection against small arm fire and artillery splinters.

The 7930 is 12.7 m long, 3 m wide and 3.29 m tall. It weighs in at 20.5 tons and has a payload capacity of 24 tons. To move this behemoth it is provided with a YaMZ 846 turbo diesel which produces 500 BHP. The power and torque is transmitted to the wheels through a six speed manual transmission and a full time all wheel drive system. This engine can push the 7930 to a maximum speed of 70 km/h on road, 40 km/h on gravel and 20 km/h off-road. It carries enough fuel to cover 1000 km before its next fuel stop. The vehicle is installed with a central air inflation system for all wheels. Turning the steering wheel turns two front axles. 7930 is a capable off-road vehicle which can tackle gradients up to 45%, side slopes of 30%, vertical steps up to 600 mm high, 2 m wide trenches and can ford through 1.4 m of water.

The 7930 is air-transportable if you can manage to get an AN-124 or an AN-22 aircraft. It also has an export version called the 79306 which has a Deutz BF8M diesel engine producing 544 BHP and is mated to an Allison automatic transmission. 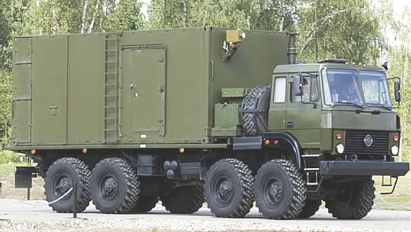 The Ural 532301 is again an 8×8 truck built by Ural Automotive Plant in Russia. It is designed to either carry the payload on the chassis or operate as a tractor to pull various types of loads. It has a short cab that can seat two people. The 532301 has a wheelbase of 1400 mm + 2750 mm + 1400 mm, ie, 1.4 m between axles one and two, 2.75 m between axles two and three and another 1.4 m between axles three and four. The truck is 8.6 m long, 2.5 m wide and 3.19 m tall. It weighs 10 tons and has a payload capacity of 21.9 tons. This heavy vehicle is powered by a YaMZ 238 B diesel engine. This engine displaces 14.86 litres and has a V-8 configuration. It produces a modest 300 BHP but an earth churning 1,180 N-m of torque. All this torque and power is transmitted to the eight wheels through an 8-speed manual transmission. The all wheel drive system comprises a two stage transfer case with a lockable central differential. This engine can push the truck to a top speed of 85 km/h on tarmac. Total fuel capacity of 494 litres in two tanks ensures a range of 1,235 km.

The BAZ 64022 is manufactured by Bryansk Automobile Plant in Russia. It is a high mobility 6×6 tractor whose development was funded by the Russian Ministry of Defence. These tractors have been designed to tow various types of semi-trailers which may be carrying oil tankers, radars or in case of the S400 system the missiles. The tractor has a full forward control cab which can seat three people. It can be armoured to protect the occupants from small arm fire or artillery shrapnel. The BAZ 64022 weighs 16.3 tons and measures 9.1 m in length, 2.75 m in width and 2.85 m in height. It has a payload capacity of 15 tons. To move a loaded BAZ 64022; a total of 31.3 tons; cross country, it is installed with a YaMz 8424.10 diesel engine which churns out 470 BHP. The engine is installed behind the cab to reduce height of the vehicle and to protect the engine induction system from mud and water. This engine can push the BAZ 64022 to a maximum speed of 70 km/h on tarmac.

The BAZ 64022 has a full time all wheel drive system driving the six wheels and a central air inflation system. As far as off-road capability is concerned, the BAZ 64022 is capable of handling gradients up to 60%, side slopes up to 40% and vertical steps up to 500 mm in height. It can traverse trenches up to 600 mm in width and ford in water column up to 1000 mm. This vehicle can be transported by air using an AN-22, AN-124 or IL-76 aircraft.

One thought on “Vehicles of the S400 Triumf System”