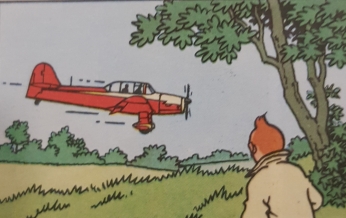 “The Black Island” openes with Tintin taking a walk with Snowy when he sees an aircraft in emergency. The aircraft landed in a field, however, when Tintin approached it, the two men who de-boarded from the aircraft shot at him and escaped. The aircraft in question was a red and cream twin-seat plan with a single nose mounted propeller. This was the deHavilland DHC-1 Chipmunk. 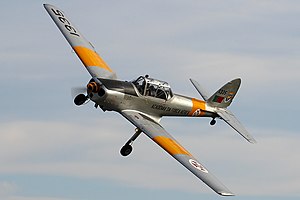 The Chipmunk was designed and developed by deHavilland Canada. It undertook its first flight on 22 May 1946 and was introduced into service the same year. The aircraft was designed as a modern trainer and replaced the deHavilland Tigermoth which was the most common trainer aircraft at that time. The Chipmunk was a modern aircraft built entirely from alloys. It was not only built in Canada, where 217 aircraft were built but was also built under license by deHavilland (the mother company of deHavilland Canada) in UK, where 1000 aircraft were built and by OGMA in Portugal where 66 aircraft were built. Most of these planes were used by the armed forces as trainer aircraft. However, because of their durability, several were bought by civilians who used them either for acrobatics or as crop spray aircraft.

The Royal Airforce used these aircraft for the longest period as trainers up to 1996. In addition to serving as ab-intio trainers these aircraft were used for patrolling during the Cyprus crisis as well as for clandestine patrols over Berlin. These aircraft did established their sturdiness and reliability by circumnavigating the Northern hemisphere in 1997. During this event the Chipmunks covered a distance of 16,269 miles (26,183 km) over 64 days and operated from 62 airfields. The Royal Canadian Air Force used the Chipmunks till 1972 while the Portuguease Air Force still has them in service. Though retried they continue to serve in the historical squadrons of the Royal Air Force. In addition to these major users, this aircraft was in service with the Belgian, Burmese, Sri Lankan, Danish, Egyptian, Ghana, Irish, Iraqi, Israeli, Jordanian, Kenyan, Lebanese, Malaysian, Saudi, Spanish, Syrian, Rhodesian, Thai, Uruguay and Zambian Air Forces also.

he Chipmunk had tandem seating with the trainee sitting in the front and the trainer sitting behind. It had a perspex sliding canopy, which was later replaced with a bubble canopy, providing all round view. Most were powered by a deHavilland Gipsy Major 8 engine. This was a four cylinder, inline air cooled engine of 1930s vintage. The same engine was used in the predecessor of the Chipmunk, the Tiger Moth. It produced 145 BHP and pushed the Chipmunk to a maximum speed of a 138 mph (222 km/h). The plane had a cruising speed of 119 mph (192 km/h) and a range of just 280 miles (451 km).