In my last post, I had introduced my readers to a luxury American brand. 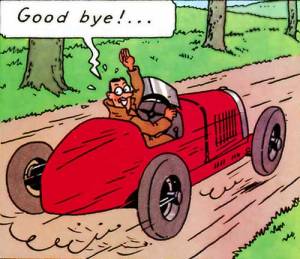 Continuing with “Tintin in America”, in one of the scenes, the villain escapes in a red sports car. This car was a Bugatti Type 37.

Bugatti was a French company, which was founded by an Italian, Ettore Bugatti in 1909 in the German city of Molsheim in Alsace. The area was transferred to France after World War I. Bugatti built high performance cars which were known for their designs and race victories at the same time. In 1929, a privately entered Bugatti won the first ever Monaco Grand Prix. These cars went ahead to win the Le Man’s 24 hour races in 1937 and 1939. The Type 35 Bugatti won over 2000 races including all races at Targa Florio from 1925 to 1929. Ettore Bugatti was from a family of artists and he considered all his automobiles as pieces of art made by him. One of the most famous and beautiful cars built by Bugatti was the Type 41 Royale. Ettore Bugatti’s son died in 1939 while testing a car and he himself expired in 1947 leaving the company rudderless. The company produced approximately 8000 cars till 1950 when production stopped.

An attempt was made in 1987 to revive the brand by an Italian entrepreneur. The cars introduced were Bugatti EB 110 and E 112.The EB 110 was advertised as the most advanced car ever built .

The brand was purchased by Volkswagen in 1998 and was revived. Today Bugatti produces some of the most exclusive sports cars in the world. The Bugatti Veyron is the most powerful and fastest road car in the world. It has an 8000 cc W-16 engine (that’s two V-8 engines joined side by side) with quad (four) turbo-chargers producing 1001 HP and 1250 N-m of torque. It has a seven speed gear box capable of propelling the car to beyond 400 km/h. This beast is capable of accelerating from 0 to 100 km/h in 2.5 seconds. If one drops the anchor at 100 km/h, the carbon-ceramic-titanium brakes bring the car to a halt in 2.3 seconds covering a distance of 31.4 meters. The rear spoiler serves as an additional air brake at speeds beyond 200 km/h. Activated by the brake pedal, the spoiler shoots up and is deployed at a 55-degree angle in less than 0.4 seconds. 400 to 0 takes less than 10 seconds.

Coming to the car in “Tintin in America”. The Type 37 was manufactured from 1925 to 1930. A total of 286 cars were built in this period. This car was powered by a 1496 cc inline four cylinder engine with three valves per cylinder and overhead cams for operating the valves. The engine was supercharged and produced 60 HP at 4700 rpm. It had a four speed gear box.  The car weighed 750 kgs and had a power to weight ratio of  80 HP/ Ton. This car was capable of doing 144 km/h (90 mph). It had a four wheel drive with semi-elliptical spring for front suspension and inverted quarter elliptical springs for rear suspension. Stopping power was provided by cable operated drum breaks on all four wheels.