The next car which I shall discuss now is an

American car which featured in the Tintin book, “Cigars of the Pharaoh”.  There is  a scene where Tintin is driving two of the Egyptologists to the sanatorium in a blue car. This car is the Lincoln Model L.

Lincolns have been frequently used by the Presidents of the USA. In fact, the first car specially built for use by the President of the USA was a 1939 Lincoln V 12Convertible. In 1950, two Lincoln Cosmopolitan Limousines were used by President Truman. The car in which President Kennedy was assassinated was a 1961 Lincoln Continental convertible.  Lincolns were the preferred choice of US Presidents through the 1960s, 70s and 80s. The Presidential car of Ronald Reagan, when as assassination attempt was made on him, was also a Lincoln.

Coming to the car in “Cigar of the Pharaoh”. The Lincoln Model L

was the first automobile produced by the Lincoln Motor Company. It was produced between 1917 and 1930. This car was designed by the founder Leland’s son-in-law Angus Woodbridge. The car hit hard times on launch due to recession in USA. This design was also considered as old fashioned. In 1922, the company went bankrupt and was bought by Ford. In a turn of events and sweet revenge, Henry Ford had Leland and his son removed from the company. I am saying revenge because, Leland had been responsible for Ford’s removal from his second company in 1909 which was later renamed as Cadillac. This car had a 5863 cc 60 Degree V8 engine with an L Head which produced 81 HP at 2800 rpm. The torque was transmitted to the rear wheels using a three speed gear box and propelled the car to a guaranteed speed of at least 112 km/h (70 mph).

A new body was designed by Ford’s son Edsel for the Model L in 1923. By this time the same engine was producing 90 HP from the same displacement. In 1927 four wheel brakes were introduced. In 1928, the engine displacement was increased to 6305 cc, however, the power output remained unchanged. Safety glass and dual windshield wipers were introduced in 1929. Earlier cars had motorised windshield wipers for the driver and hand operated wipers for the passenger. These cars were made available in the following body shapes:-

Lincoln being a luxury model, provided ample opportunities for customisation. Sedan, limousine, cabriolet and town cars were offered by coach builders Fleetwood, Derham, Dietrich and Brunn. Lincoln as a company also contracted with dozens of coach builders during the 1920s and early 30s to create multiple custom built vehicles. These included American, Anderson,

Babcock, Holbrook, Judkins, Lang, LeBaron, Locke, Murray, Towson, and Willoughby in the 1920s while Murphy, Rollston and Waterhouse were added in the 1930s.

In 1930, this car was replaced by the Lincoln Model K. 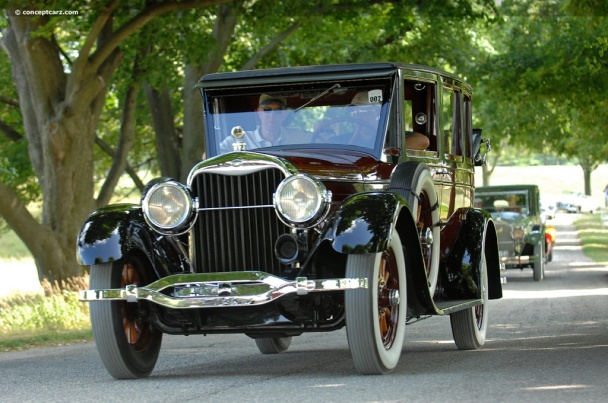 Tagged as: Cars of Tintin, Lincoln