In my last post I had described the Lincoln L3. Continuing with the same Tintin book, “Cigars of the Pharaoh”, 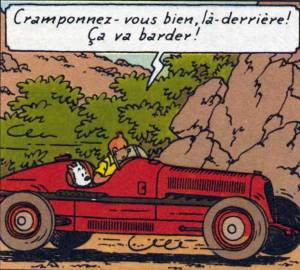 the next car that Tintin is seen driving is actually not a road legal car. It was a race car built for Grand Prix racing. The car under discussion is the Alfa Romeo P3.

I shall give a short introduction to Alfa Romeo first. It is an Italian luxury automobile maker under the Fiat Group. One of the iconic brands that Fiat owns in addition to Ferrari and Lancia. The company was founded on 24 June 1910, in Milan as A.L.F.A., which stands for Anonima Lombarda Fabbrica Automobili, or Lombard Automobile Factory, Public Company in English. This company has been involved in car racing since 1911 and was the precursor to Scuderia Ferrari race team. In fact the prancing horse of Ferrari was first seen on Alfa Romeos. Between 1932 and 1986 it was owned by Italian state holding company Istituto per la Ricostruzione Industriale. The company was taken over by Fiat in 1986. In February 2007 the Alfa Romeo brand was transformed into the current Alfa Romeo Automobiles S.p.A. which is a subsidiary of the Fiat Group Automobiles S.p.A.

Coming to the car, P3 was designed by Vittorio Jano for the 1932 Grand Prix season. These cars were built between 1932 and 1935. The car was also known as the ‘Monoposto’,

which is Italian for single seater. It was the first single seat race car in regular GP use. This car went on to win five major races in 1932 with Nuvolari and Caracciola , the two best drivers of the day, racing them. The P3s were grounded for the first half of the 1933 season due to financial difficulties. However, they were released to Scuderia Ferrari in time. Fagioli and Chiron scored three victories each in these cars in 1933.

These cars were propelled by a 2654 cc inline 8 cylinder engines. Actually this engine was a combination of two four cylinder blocks joined together, with each four cylinder set having its independent roots supercharger. It had twin Over Head Cams (OHC) with central drive. There were two valves per cylinder. Compression ratio of the engine was 6.5:1. The engine produced 215 HP at 5600 rpm. The car employed a  four speed gear box. Top speed of the car was in excess of 224 km/h (140 mph). One of  major strengths of the engine was its low-speed torque, giving high acceleration. Power to the rear wheels was transmitted through twin drive shafts. This allowed for the drivers seat to be placed lower in the chassis. The car weighed only 700 Kgs (1,545 lbs), and it would have weighed considerably less but for its cast-iron block engine. To stop this rocket, four 15 ¾” diameter drums were employed. The car suspension comprised semi-elliptic springs with single friction shock absorbers at front and semi- elliptic springs out rigged from frame with double friction shock absorbers at rear. 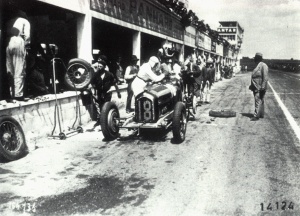 a compression ratio of 7.0 :1. Most of the 1932 cars were converted to 1934 spec as well. The modifications resulted in a 1-2-3 finish in the opening round of the year which was the French GP. This was to be the last dominating victory for the P3, as the German cars proved to be far more powerful and reliable there after. However, when the German cars were not participating, the Alfas did manage to win. They scored 8 victories in 1934 including a defeat of the Auto Union at Avus with a special streamline bodied P3.

1935 was the last year when these cars were raced. For this season, they employed a 3165 cc engine that ran on 7.1: 1 compression ratio. They produced 265 HP at 5400 rpm and were capable of propelling the car to 272 km/h (170 mph). These cars employed a three speed gear box. The suspension was also upgraded to reversed quarter-elliptic springs with single friction shock absorbers and single tubular hydraulic shock absorbers. 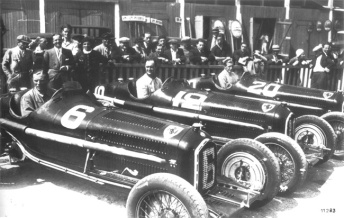 However, these cars were no match for the Nazi backed Auto Unions and Mercedes-Benz. Ironically, during the Nürburgring race in July 1935, possibly the most famous of all GPs ever, Nuvolari scored one of the very best victories of his career as he managed to beat 8 German cars in front of a crowd of Nazi officials . This crowd of almost 300,000 had gathered to see one of the two German cars – Auto Union or Mercedes Benz – win. A total of 9 Auto Unions and Mercedes-Benz started the race. Nuvolari took  second place in the 14th lap, 88 seconds behind the leading Mercedes of Von Brauchitsch. Six laps later he had closed the gap to 35 seconds, it was the final lap. Von Brauchitsch’s tires were in very poor condition and finally gave up in the Karousel section of the track leading to Nuvolari winning the race. Von Brauchitsch managed to limp home to finish fifth. 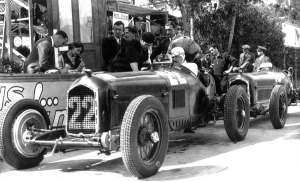 One thought on “Alfa Romeo P3”