After stealing King Ottokar’s Scepter, the villains escaped towards Borduria in a magenta coloured car. This car was a Chevrolet Confederate. All the identifying features of this car have been replicated faithfully in the illustration. The spare wheel has been shown attached to the rear, as are the twin downward curved rods for supporting the the headlights and the cowl lights near the wind screen.

The Chevrolet Confederate replaced the Independence in 1932. Though it was launched in the midst of the great depression, the car was quite successful for the period. More that 313,000 cars were manufactured and sold. Chevrolet Confederate was offered in a number of body shapes provided by Chevrolet or Fisher like:-

In addition to the USA, this car was assembled in Canada, Japan, South Africa, Argentina and Belgium. These Belgian cars must have found their way to Syldavia and Borduria.

Though the Confederate replaced the Independence, many features from the Independence were carried forward in this car. This included the Stovebolt Six engine. It was a naturally aspirated 3,179 cc inline six cylinder petrol engine. This engine breathed through Overhead Valves and produced 60 BHP at 3,000 rpm. It also produced 176 N-M of torque between 800 and 2,000 rpm. Depending on the model, torque was transmitted to the rear wheels through a single plate clutch and three or four speed gearbox with synchromesh on all gears. The gearbox also had a freewheeling mode which allowed the engine to coast when the driver lifted his/ her foot off the accelerator.

Interestingly a horn and / or passenger side brake or parking lights could be ordered as an optional extra. Light indicators had not yet been implemented and hand signals were the norm for driving this car.

Stopping power was provided by mechanical internally expanding articulated shoe type drum brakes on all four wheels. The rear wheels had additional internally expanding mechanical emergency brakes also. These wheels were mounted on solid beam axles suspended by hydraulic shock absorbers and leaf springs which comprised between 6 to 8 leaves depending on the models. These cars rode on 18 inch wire wheels.

These cars are pretty popular with the hotrodding scene and a number of these cars can now be seen doing duty as modified hotrods also. 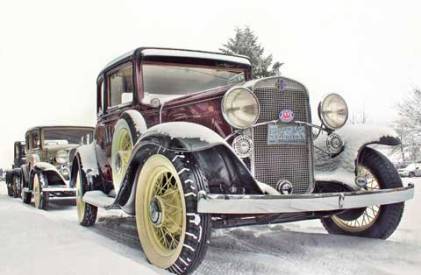