We now come to the 9th book in the Tintin Series. A book, I consider very important as one of the most lovable character was introduced in this book. Yes, the bumbling, whiskey loving, hot headed, but clean at heart and sweet man, Captain Haddock. This book is “The Crab with the Golden Claw”. Tintin meets Captain Haddock onboard the “SS Karaboudjan”. The ship’s mate Allan, took advantage of the Captain’s dependence on Whiskey and used his ship to smuggle opium. There are very few cars in this book which is mainly based at sea and in the deserts of Morocco in North Africa. Later in the story, while in the port of Bagghar, Captain Haddock was kidnapped on the jetty by Allan’s men and Tintin tried to give them a chase. However, the car in which he attempted the chase was towed away by another truck. This tow truck was based on the chassis of a Ford Pickup of 1937. 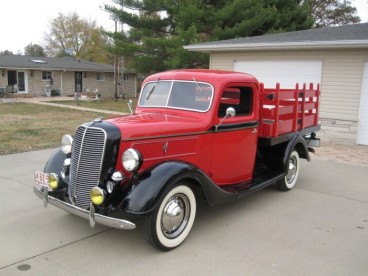 The Ford Pickup of 1937 was differentiated from the cars in that the headlights were not integrated into the fenders. Other than this, the vehicle shared the same wheelbase and engine as the Ford cars of the era. These trucks had a 2845 mm wheel base. They were powered, as all other Ford cars, by a naturally aspirated V-8 petrol engine. These engines were offered in two sizes, the 85 BHP 3,622 cc engine or the lower powered but more fuel efficient 60 BHP 2,229 cc engine. However the 60 BHP engine was not very popular and it was discontinued later.

Body shape of the pickup trucks, unlike the cars, was carried over from the 1935-36 model except for the pickups called the Sedan Pickups which shared the front end with the cars. However, all vehicles had the new V-shaped split windshields. These trucks were offered in two trims, standard and Deluxe. The Deluxe trim had two windshield wipers, two chromed horns, chrome windshield frame and chrome grille, while the standard model had one wiper, one horn, body coloured windshield frame and body coloured grille. These were the last Ford trucks to be manufactured with side opening bonnets.

In the 1930s, pickups were not bought as lifestyle vehicles for leisure and sporting activities. They were bought as work horses and used as such. These trucks had a carrying capacity of 1/2 ton or 1 ton.

The various body styles offered on these trucks were:-

These trucks were front engine and rear wheel drive. The drive was transmitted to the rear wheel via a four speed manual gearbox which had lower gear ratios as compared to the cars. They were tough, reliable and sturdy, built to be driven over unpaved roads that connected America at that time. The vee-shaped split windshield allowed for better aerodynamics and allowed the trucks to go faster.

However, due to Ford’s resistance to changing over to hydraulic brakes, a technology offered by Dodge way back in 1929, these vehicles were still offered with mechanical brakes.

These trucks are very popular with hot-rodders and collectors. A large number of companies in the US are involved with their restoration and conversion.