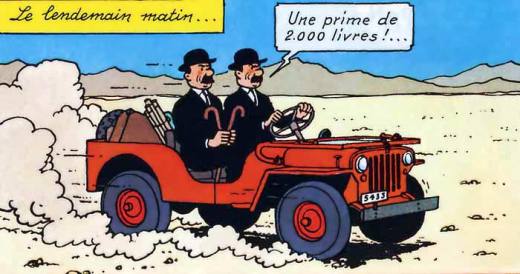 Sheikh Bab-El_Ehr’s men rescued Tintin from the Police at Khemikhal in a Morris Six. Meanwhile Thompson and Thomson were tricked by the Police into searching for and bringing Sheikh Bab-El-Ehr in exchange for £ 5000. The two detectives started their journey in a red coloured car which is one of the most iconic and widely recognised vehicles. A Jeep CJ2A. These two poor fellows kept getting lost in the desert for a long long time, but their trusted Jeep never gave them any trouble even after it was crashed into trees and what not. 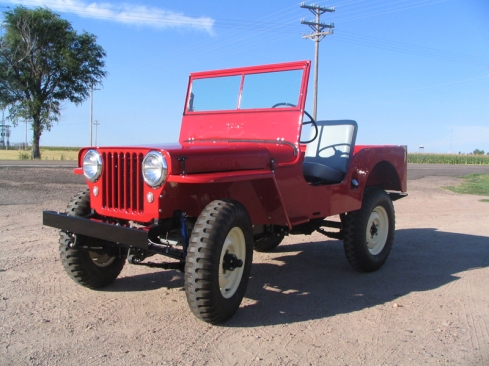 The Jeep started its life as a purely military vehicle. It was developed for the US Military during World War II. When the US was convinced that it would soon be joining the War in Europe, the US Army contacted 135 companies to develop a four wheel drive reconnaissance car. Two companies responded, American Bantam Car Company and Willys-Overland. The Army had set a timeline of just 49 days to deliver the prototype. Willys-Overland asked for an extension but was refused. On the other hand, Bantam submitted its bid along with blueprints within five days and readied the BRC prototype and delivered it within 59 days of the bid being submitted. The prototype met all the specifications of the US Army except Engine Torque.

However, the US Army considered Bantam to be too small a company to be able to deliver the numbers desired and hence their design was handed over to Ford and Willys for modifications and submission of their designs. Ford presented the Pygmy and Willys the Quad. Later the prototype developed by Willys was selected as the standard Jeep and was designated the Model MB. Due to war time conditions, Willys granted a non-exclusive license to the US Government and provided all designs details to Ford, which was the second company to build jeeps. Ford vehicles were called the Model GPW.

By 1944, the Allies were confident of winning World War II and this set Willys-Overland thinking to develop a vehicle which could be used by civilian public after the war was over. By May 1944 the CJ1 was up and running. It was a modified MB but with a tailgate that could be opened, a drawbar and a civilian style canvas top. The CJ2s had in addition Power Take Off shafts for agricultural equipment, engine governors and column mounted gear shifters.

The first production Jeep was the CJ2A. The major difference between the MB and the CJ were the headlights. While the MB had recessed headlights, CJ2A had larger headlights flush-mounted in a seven-slot grille. The car was powered by an inline four cylinder 2,200 cc (132.4 cu-inch) naturally aspirated petrol engine named the “Go Devil”. These engines produced 60 BHP at 4,000 rpm and a respectable 142.3 N-m (105 lb-ft) 0f torque at 2,000 rpm. All this power and torque was transferred using a three speed gear box along with low gear transfer case. The clutch was single, dry plate type. They had a selectable four wheel drive system which had been sufficiently proved during the various battles of World War II. 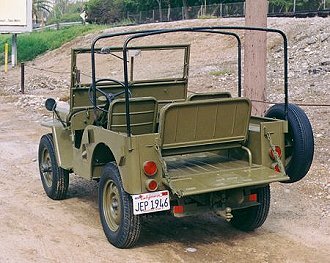 These were small cars with a wheel base of just 2,032 mm (80 inches). The front axle was a live driving unit with hypoid drive gears, and spherical steering knuckles containing constant velocity type axle shaft universal joints. The rear axle was  semi-floating type. Stopping power was provided through hydraulically operated drum brakes on all four wheels.

These vehicles were mainly manufactured for farms and had “Power Take Off” shafts to run various farm implements. The base versions came with only driver seats. However, they had tailgates that actually opened and higher versions had rear seats. The driver side wipers were powered while passenger side wipers used to be manual. Even tail lights were provided only on the driver side while the passenger side had reflectors.

In order to overcome the melancholy of the war years, these jeeps were offered in bright colours and the same has been truly reflected by Herge where this vehicles had been shown in bright red.