In my last post we saw that Tintin had gone looking for Prince Abdullah in a Lancia Aprilia. Abdullah had been kidnapped by Professor Smith and he was racing across the desert in a maroon car with a huge toothy grille. A car, which was identified so distinctly by its grille. It was an American monster built by Buick. The car was a Buick Roadmaster, this particular car being the 1949 model.

Buick, a brand owned by General Motors built the Roadmaster from 1936 to 1958 and then again from 1991 to 1996. Cars built between 1936 and 1958 shared their basic structure with entry level Cadillac’s and were manufactured on the largest non-limousine chassis of Buick. It was Buick’s flagship between 1946 and 1957. It was related to the Cadillac 61, 62 and Oldsmobile 98. It was also the largest car in Buick’s portfolio when the name was resurrected in 1991.

The 1949 Roadmaster was designed by Harley Earl and was available in a number of body styles including the:- 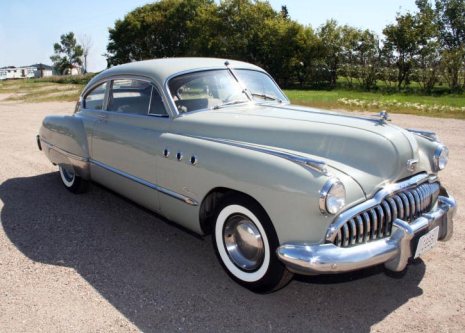 The car in which Professor Smith kidnapped Abdullah was a 2-door Riviera Hardtop. There is a very interesting story about the four Ventis Ports that were seen on the fenders of the Buick. They were taken from the customisation that Buick styling chief Ned Nickles had carried out on his 1948 car. He had had four amber lights fitted on the fenders of his car which were connected to the distributor and lighted as per the firing order of the engine’s cylinders. They looked like the fire from the exhaust stack of a fighter plane. The ides was to let the driver sit in the cockpit of an imaginary fighter aircraft as he drove around the town.

Roadmasters were powered a naturally aspirated inline eight cylinder petrol engine displacing 5,244 cc (320 cu-inch). These engines breathed through 2 valves per cylinder. This engine produced 150 BHP at 4,000 rpm and gave the 2,000 kg car a maximum speed of  176 km/h (110 mph).  They produced a healthy torque of  407 N-m (300 lb-ft) at 2,400 rpm. The power was transferred to the rear wheels through a two speed “dynaflow” torque converter automatic transmission.

These cars could accelerate from 0-60 mph in a sedate 16.6seconds and a 0 to 100 km/h in 17.7 seconds. Stopping power was provided by hydraulically operated 12 inch drum brakes on all four wheels. The wheels were located on semi-floating axles front and rear with coil springs providing the suspension.