After solving the mystery of exploding car engines in “Land of Black Gold”, Tintin and Captain Haddock were invited to Syldavia by Professor Calculus. This was Tintin’s second visit to this East European country after “King Ottokar’s Scepter”.  The duo was  received at the airport and taken under the charge of the ZEPO, the secret police of Syldavia. They were then taken on a long journey into a secret area in a blue coloured car. This car was a Dodge Coronet, 1949.

Coronet means a small crown worn by princes and dukes. People, who are important but not the kings and queens. The Cornet was the top model offered by Dodge from 1949 to 1955. In 1949, in order to celebrate new body styles introduced by Dodge since 1945, the company changed the naming system and started identifying its various models by names rather than by letter and number codes or generic corporate shared names like Standard, Deluxe etc. 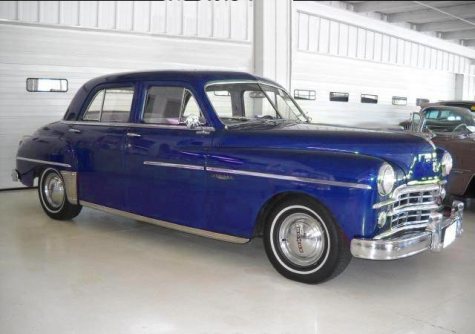 The 1949 Coronet had a low and long look, however, it retained the conservative looks of the post-war cars. It had that typical toothy grin, a hallmark of American cars of the era. High set headlamps with parking lights positioned below them. Dodge offered the Coronet in a number of body styles like:-

All this power and torque was transmitted to the rear wheels through a 3-speed automatic transmission known as the “Fluid Drive”. Stopping power was provided by drum brakes on all four wheels. However, in favour of safety, the front brakes had two cylinders instead of one providing better stopping power and fade resistance. Dodge used bonded brake lining for the first time.

On the comfort and styling side, these cars came loaded with a heater, electric clock, radio, white wall tyres and turn signals. The Coronet was a successful car with 260,000 sold in 1949 itself, this taking Dodge to number 2 position in its class and the sixth largest automobile maker as a whole. The company held on to a 6% market share.