In my last post we saw that Tintin and Captain Haddock were received by ZEPO, the Syldavian secret police and taken to a secret place. Our heroes were in a Dodge Coronet while the ZEPO followed them in a 1949 Ford. Tintin had been taken to the super secret Sprodj Atomic Research Center where they were building a nuclear powered rocket to take man to Moon. As with any such high value asset, this Center had a number of safety features including its own Fire Brigade. The Fire Engines depicted in the book are based on the Bedford QL Series. 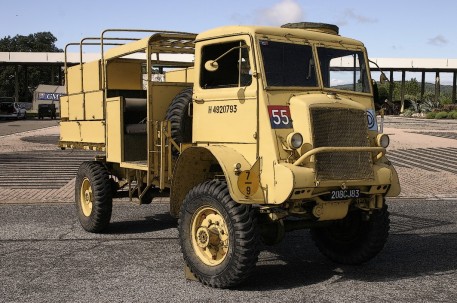 Bedford was the Truck Arm of General Motors owned Vauxhall Motors of UK. It was a major international truck brand and was one of the most profitable arms of GM Europe. These trucks were manufactured from 1930 till 1987 when GM divested the arm as AWD Ltd. Light trucks built by GM were thereafter branded as Vauxhall in UK and Opel in continental Europe. Bedford trucks were assembled in India by Hindustan Motors from 1948.

The QL series of Bedford, which has been depicted in the Tintin book “Destination Moon” was introduced in 1941.This truck was specially developed for the British Army. The main difference in design was that this was a full forward cab design, ie the driver sat over the engine. The QL series, also called the “Queen Lizzie” served the British as well as Soviet forces during World War II  in a large number of roles. These roles included:-

These trucks were powered by a 3,519 cc (214 Cu-inch) inline six cylinder naturally aspirated petrol engine. These engines produced 72 BHP at 3,000 rpm. The torque and power was transmitted to all four wheels through a two speed transfer case and a four speed gear box. Stopping power was provided by hydraulically operated and servo vacuum assisted drum breaks on all four wheels. These trucks could ford up to a depth of 400 mm without any

preparations but were not kitted for deep water fording.

One thought on “Bedford QL Series”