Tintin and Captain Haddock were back and Geneva. While they walked back to their hotel, someone in a Maroon car with a Diplomatic Numbers passed them and threw a lighted cigarette which landed on Captain Haddock’s shoes. Tintin picked up the stub and realised that the brand was same as the one smoked by the villains who had trespassed into Professor Calculus’ laboratory as well as the men who had bombed them in Professor Topolino’s house. The car, which had passed them was a 1953 model of the Mercedes 300 Adenauer.

The Mercedes Benz 300 was the spiritual predecessor of the present day S Class. It was manufactured from 1951 till 1962 as three chassis codes of Mercedes Benz called the W186, W188 and W189. The car that passed Tintin on the Geneva street was the W186. The W186 was manufactured as a Sedan or Cabriolet and the W188 was a 2-door convertible. These cars were considered equal in luxury and price to the Rolls Royce Silver Cloud and the BMW 501, but they had superior performance compared to these competitors. 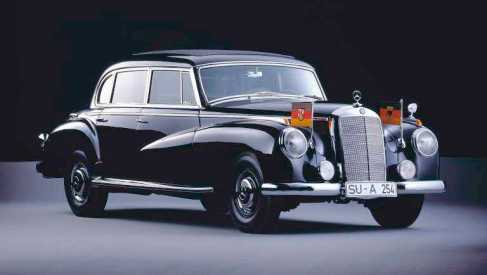 Even in the 1950s these cars had features like VHF mobile phones and dictation machines installed in them. Though officially the 300, popularly these cars are called the Adenauers after Konrad Adenauer, the first Chancellor of Federal Republic of Germany who had employed six such custom built cars during his tenure. Some of the custom features of these cars were, writing desks, sirens, curtains, dividing partitions, sunroofs, and half-roof configurations.

The W186 was introduced during the Frankfurt motor show in 1951. It was offered in the following body shapes:- 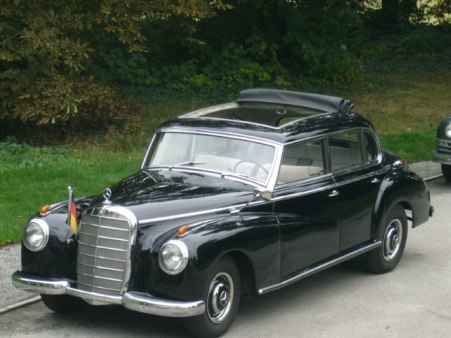 These cars were powered by 2,996 cc (183 Cu-inch) inline six cylinder naturally aspirated petrol engines. These engines breathed through two valves per cylinder operated by a Single Overhead Cam (SOHC). It produced 115 BHP at 4,600 rpm and 196 N-m (145 ft-lb) of twist at 2,500 rpm. All the power and torque generated was transferred to the rear wheels through either a four speed manual gearbox. The engine featured deep water jackets, thermostatically controlled oil cooling, copper-lead bearings and a hardened crankshaft. It had no natural cruising speed. As a result, road conditions permitting, this car could sustain speeds up to its maximum speed all day long.

The six litre engine could push these behemoth to a maximum speed of 155 km/h (96 mph). This engine had a flat torque curve from 2,500 rpm when it produced maximum torque to 4,500 rpm where maximum power was produced, thus providing ease of driving as well as good in gear accelerations.This giant accelerated from 0 to 100 km/h (62 mph) in 16.8 seconds and could complete a quarter mile drag in 20.3 seconds achieving a speed of 108 km/h (67mph) at the end of the drag strip. Four hydraulically operated drum brakes could be engaged at the end of the drag strip to bring the car to rest.

This car was huge a success with both businessmen and politicians.