My last post described the DKW 3=6 in the background as Tintin and Captain Haddock were walking back to their hotel in Geneva. The detailing of Herge is such that even if an insignificant thing had to be shown in a small frame, the background was detailed and cars shown were real. The car I am discussing has been shown in a frame far behind the characters in the background. Still it can be identified distinctly as a Ford Taunus. 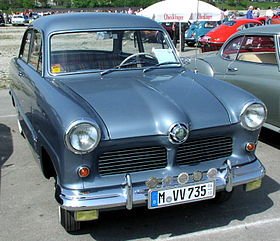 e Ford Taunus was named after the Taunus mountain range in Germany. It was sold by Ford of Germany in Europe in various versions from 1939 to 1994. The car shown in “The Calculus Affair” is the first generation Taunus M Series. This car was manufactured from 1952 till 1962. It was classified as a small family car and was made available as:-

This car was marketed as the Ford Taunus 12M through out its life cycle, while the 15M with a larger engine was also sold from 1955 to 1959. This was the first new car to be introduced in Germany since before World War II. It used the radical three box Ponton format which was the in thing in Germany at that time. The car placed Ford ahead of its rivals because it was unusually modern in terms of the bits that showed. Design of the car was heavily influenced by the Studebaker Champion, including the rounded above the grille. Studebaker had positioned an ornamental propeller in this roundel while Ford placed half a globe. This gave the car the nickname “Welkugeltaunas” or the “Globe Taunas”.

The name 12M could be divided as 12 for 1.2 litre engine and M for “Meisterstück” or “Masterpiece”. This was done to differentiate it from the old Ford Taunus which was going to be sold along with the new car, at least in 1952.

The 12M was powered by a 1,172 cc (71.5 Cu-inch) inline four cylinder naturally aspirated petrol engine which produced 38 BHP at 4,250 rpm. This engine churned out 74 N-m (55 ft-lb) of twisting moment at 2,200 rpm. For producing all this power a torque, the engine inhaled through one side valve and exhaled through another single valve per cylinder. All this power and torque was transmitted from the front mounted engine to the rear wheels through a three speed manual gearbox. 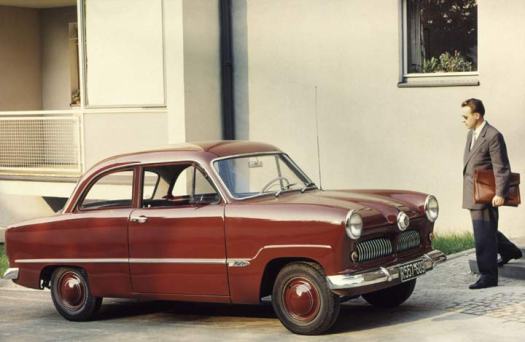 The car was introduced with small (for that time) 13″ wheels in order to increase the interior space for passengers. It had an independent front suspension and a rigid axle rear suspension from the old Ford Taunus. In fact the engine was not only from the previous generation Taunus, it was also used in the Ford Eifel from the early thirties. Though the car was two door, the front seat offered was a bench seat which described the car’s American lineage and made it a success as the USA was a much admired country at that time, especially in Germany.