Its a long drive from Switzerland to Borduria. Though our friend Arturo B G G P A A C da Milano has been driving at breakneck speed to catch up with the villains, many a cars, trucks, carts etc attempted to interfere with his valiant attempt. Most of these vehicles were missed narrowly and some found themselves pushed off the road. However, in such scenarios, most of the time might is right. Result, Arturo narrowly missed being driven off the road himself by a big blue truck representing the might of the American automobile industry. A Dodge WD series truck from the “Job Rated” trucks era. 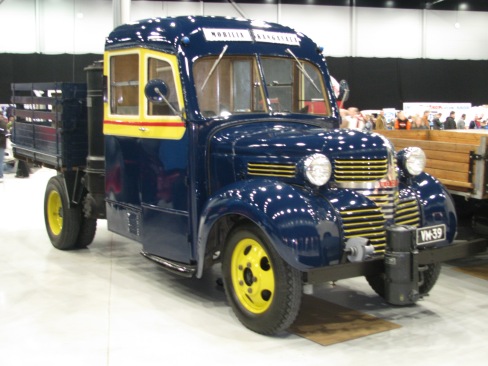 In 1939, Dodge had introduced the concept of “Job Rated” trucks. The concept was to offer a truck to the customer that fit the job for which he/ she was buying it for. 1930s required everything from cars, aircraft, boats to trains to be streamlined. Keeping with the essential requirements of the 1930s,  these trucks were also designed to be streamlined. It was attained through a new sloped windshield, a long and sleek bonnet, long and sleek front and rear fenders with “Speed Lines” embossed on them and a sharp V-shaped grille. The trucks had all steel cabs with a two piece windscreen. This windscreen could be opened to let in fresh air for ventilation using a crank provided for the same. Another innovation was the use of sealed beam headlamps. They also employed marker lamps for ease of driving and safety.

Dodge offered these trucks in various guise with payloads of 1/2 ton, 3/4 ton and 1 ton. The truck shown in “The Calculus Affair” is a one ton truck. “Job Rated” trucks had stronger frames which were manufactured using high tensile steel. The 1 ton truck shown in “The Calculus Affair” was offered with two wheel bases, 3,099 mm  (120″) and  3,378 mm (133″). All trucks employed solid axles front and rear suspended using semi-elliptic leaf springs at each wheel.

These trucks were powered by 3,568 cc (217.6 Cu-inch) 6-cylinder inline, naturally aspirated petrol engines. These engines produced 77 BHP when introduced. Later the power was bumped up to 82 and finally 85 BHP. In 1942, the 3,772 cc (230.2 Cu-inch) petrol engine was introduced in the 1-ton trucks. This engine produced 102 BHP. Later, Dodge became the second American manufacturer to offer an indigenous diesel engine on these vehicles, Mack was the first American company to offer an indigenous diesel engine.

Power was transmitted to the rear wheel through a three speed manual gearbox. A four speed manual gearbox with a compound first gear could also be ordered if the job so required. These trucks are one of the most sought after vintage vehicles in the USA and are frequently used as the base for hot-rods and low-riders.

One thought on “Dodge WD Series”