It has been a long a long journey for our friends Captain Haddock and Tintin who have set out on a mission to rescue their close friend Professor Calculus. We know by now that Professor Calculus has been kidnapped by the Bordurians. After a botched attempt to rescue the professor from the Bordurian embassy, our friends have been pursuing the villains using a number of modes of transport. The fastest and most aggressive means has been a Lancia Aurelia driven by our good friend Arturo. Thank to Arturo, Tintin and Captain Haddock have been putting their lives in jeopardy by just sitting in the back seat of his car. They have been facing numerous life threatening situations in search of their friend Professor Calculus by merely being passengers of Arturo in his iconic Italian Gran Tourismo. 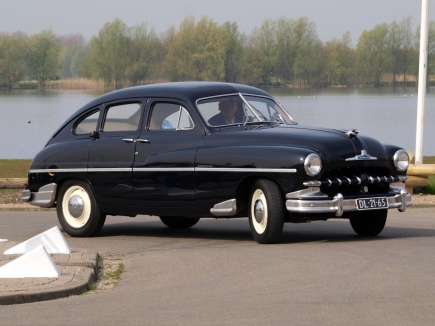 After missing a Dodge WD series truck in a village, the next target of Arturo’s driving was a Ford Vedette. This car was manufactured in France by the French subsidiary of Ford, Ford-SAF. This company existed under various names between 1916 and 1954. As was the case with other Ford subsidiaries, this company had also started life assembling Ford Model Ts in France. It’s manufacturing business was finally sold off by Ford to Simca in 1954. After 1954, the company became Ford France and simply became an importer of British built Ford Anglia and German made Ford Taunus.

The Vedette was manufactured from 1948 to 1954 at the Poissy plant in France.Beyond 1954, the next generation car was sold as a Simca Vedette. The Vedette was a large car built to American taste. It had been designed entirely in Detroit and resembled the Mercury models of the time. It was offered in various body shapes like:-

When the car was launched, France was still recovering from the vagaries of World War II. The Poissy factory was not up and running to full capacity, as  a result, a large number of components and parts were manufactured through subcontractors. This had quality related issues and led to a poor public response to the vehicle.A number of improvements were introduced later under the stewardship of Mr. François Lehideux. 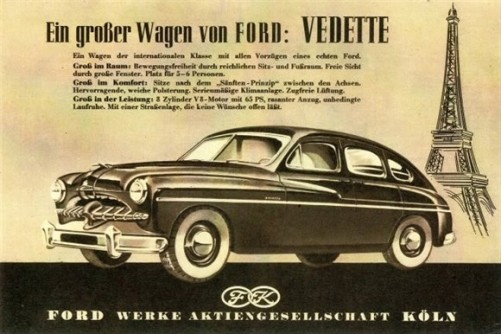 The 1949 Vedette was powered by a 2,158 cc (131.7 Cu-inch) naturally aspirated V-8 petrol engine. These engines breathed through two side valves per cylinder. Combustion of petrol in their cylinders generated a maximum power of 65 HP at 4,600 rpm. The exploding charge pushed the pistons to turn the crankshaft and generated a torque of 123 N-m (91-ft-lb) at 2,500 rpm. All this power and torque was transmitted to the rear wheels through a three speed manual gearbox.

These cars were offered with McPherson independent suspension with coil springs at the front. Stopping power was provided on all four wheels through drum brakes.