In the last scene from “The Red Sea Sharks” Joylon Wagg’s Vagabond Car Club has created a total chaos in the well manicured gardens of the Marlinspike. There is a rally planned on Captain Haddock’s premises with no regards to the Captain’s opinion about the same. A permission for the event was not even sought, Joylong claiming to be such a great friend of the Captain. Just right of the Rally Control and ahead of the yellow Citroen DS is a small white couloured; what is it; an egg? But no, its been shown to be moving, and eggs do not move around on their own. Well this a car, a precursor to our very own Tata Nano. It is the Isetta. 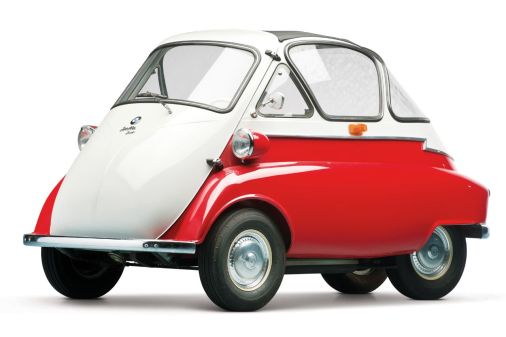 The Isetta was an Italian designed micro car. It was manufactured by a number of companies like Iso Autoveicoli, BMW, VELAM and Romi across Spain, Belgium, France, Brazil, Germany and UK. The first car was produced bu Iso Autoveicoli in 1953 and the last one was manufactured by BMW in 1962. Isetta means “The small Iso”, named after the company that designed it. Iso was a manufacturer of refrigerators, scooters and a small three wheeled truck akin to the modern Piaggio Ape. The company decided to build a small car based on a motorcycle engine in 1950 and came up with the Isetta in 1952. It was designed by Ermenegildo Preti and Pierluigi Raggi.

The Isetta was unlike anything which the world had seen before. It was tiny, had a front opening single door, bubble shaped windows and was overall shaped as an egg. It was provided with a canvas sunroof which doubled as an emergency exit in case of a frontal accident making the only door inoperable. The steering wheel and the instrument cluster were hinged and mover with the door providing easy access to the single bench seat. This tiny car could seat two people in reasonable comfort and may be a small child too. A small parcel shelf was provided behind the seat underneath which was the engine, accessible from the right side and a spare wheel. This tiny car was provided with a heater and in case you felt claustrophobic, the canvas sunroof could be opened to let in some fresh air.

The car was also sold as the Autocarro which was a commercial vehicle. It was manufactured in Italy and Spain. It had conventional rear wheels and axle with leaf springs and could carry a payload of 500 kg. It was quite popular in Italy. It was offered as a:- 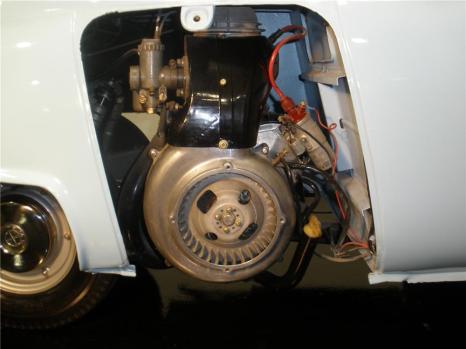 Originally the car was offered with a two stroke 236 cc (14.4 Cu-in) single cylinder engine producing 9.5 BHP. Later BMW offered their own naturally aspirated single cylinder 247 cc (15.1 Cu-inch) petrol engine breathing through two valves and generating 12 BHP at 5,800 rpm. It generated 14.2 N-m (10=ft-lb) of torque at 4,500 rpm. All this power and torque was transmitted to the rear wheels via a chain drive through a four speed gear box. The initial car was designed with a single rear wheel. As a result the car was prone to toppling over. To overcome this issue, two rear wheels with a track of only 480 mm (19″) apart. This short track eliminated the requirement of a differential and only a solid rear axle was used.

BMW had modified the car so much that none of the parts between the German Isetta and other cars matched or were interchangeable. BMW built and sold 161,728 units of the car. Later BMW upgraded the engine to 300 cc and introduce the Isetta 600 powered by a 582 cc twin cylinder engine from the R 67 motorcycle which allowed the car to achieve a maximum speed of 103 km/h (64 mph). This car was a two door hatchback – one door at the front and one on rear right side – with a rear bench seat, a conventional rear axle and semi-independent trailing arm suspension.

Microlino has come up with a modern iteration of the Isetta. It is an electric car which is cheap at between $ 9,000 and $ 13,500  as compared to a Tesla costing $80,000. The idea is that in an urban environment 95% of the commutes are for distance not exceeding 35 km at speeds not exceeding 50 km/h. Microlino has a 15 KW-h motor with a range of 100 km and a max speed of 100 km/h thus meeting these requirements. Design of the car is much inspired by the original Isetta. 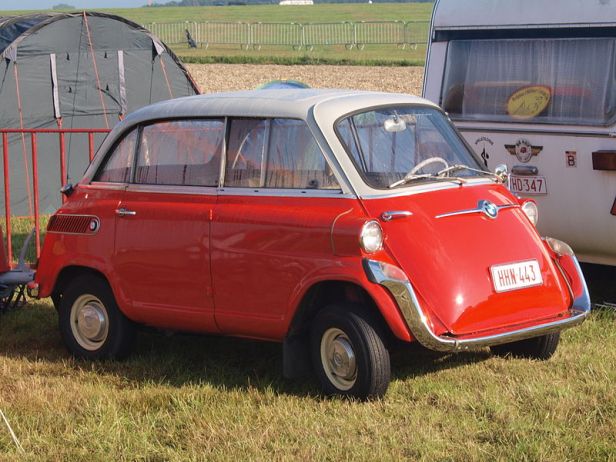 One thought on “Isetta”