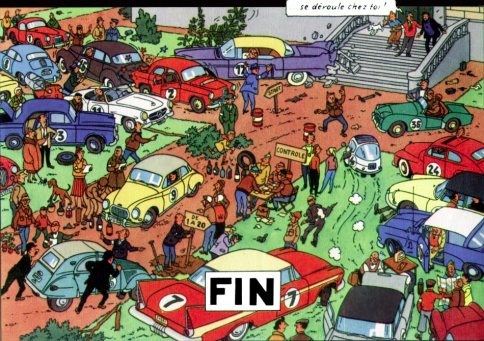 A red and cream coloured car number 7 dominates the foreground in the last picture in the book “The Red Sea Sharks”. Its huge and dwarfs the other European cars. Competition is offered only by car number 17, another behemoth from across the Atlantic. A Cadillac Eldorado. The car under discussion is the Plymouth Belvedere. Actually, in 1957, when the Belvedere was launched, General Motors, manufacturer of the Eldorado and Ford had gone into shock. The car was touted as the future presented today. The advertisements from Chrysler Corporation trumpeted – “Suddenly – It’s 1960!” and “1960 — Now, Plymouth is three full years ahead.”, another advert went on to say – “In one flaming moment, Plymouth leaps three full years ahead—the only car that dares to break the time barrier! The car you might have expected in 1960 is at your dealers today!”. What Chrysler had done was scuttling the complete five car line up just two years in production and introduced a planned 1960 model in 1957. While products of GM and Ford were inspired by the aircraft, especially jets, the Belvedere was inspired by the space ship. It was designed by Virgil Exner. 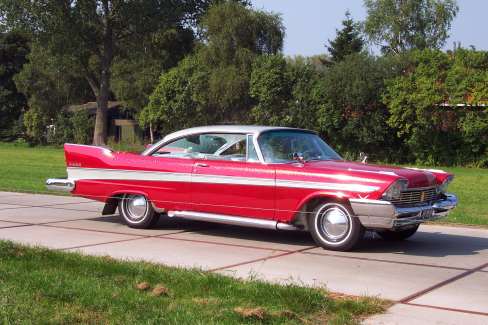 The Belvedere was manufactured by Plymouth from 1954 to 1970. It was the top of the line full sized American car, in effect a small apartment on wheels. The car was lower and wider, though shorter than the outgoing 1956 model car. It was endowed with the “Forward Look of Motion”, in effect a wedge shape comprising low front fenders and bonnet, a gently sloping wind shield, tapered rear windows, and rising fins topped with a razor thin flat roof. Side trim was minimal, enough to allow the dual paint schemes to be implemented effectively where required. These cars were offered in a number of body styles like:- 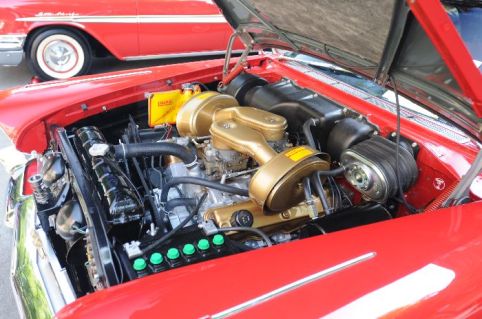 These cars were offered with a number of power train options that included the following:-

All the power and torque generated by these front mounted engines was transmitted to the rear wheels through either a three speed manual transmission or a two or three speed push button operated automatic transmission. The Belvedere was the best handling American car of its time. Its suspension comprised a torsion bar set up with ball joint steeling. This was complemented by the “Torsion Aire Ride”. The leaf springs were re-designed with short, stiff leaves in front of the axle and long, soft leaves at the rear. The arrangement of the springs minimised rear end squatting under acceleration and also lowered the center of gravity thus improving rear end stability. The weight distribution was near perfect approaching theoretical sports car distributions. 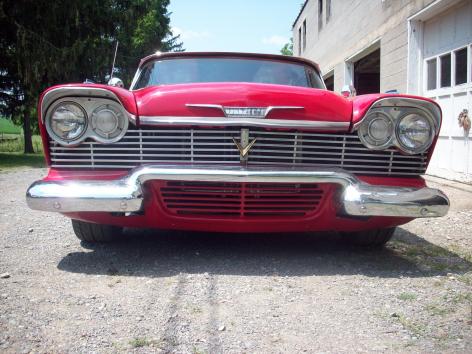 Stopping power was provided to the cars through four 11″ drum brakes on all four wheels. Police cars were provided with 12″ drum brakes. As far as luxuries of life are concerned, Air conditioning was offered as an option. As a move towards modern air conditioning, all components of the air conditioner were moved into the engine bay and the system was integrated with the heating system. This move also liberated more space in the boot as earlier some of the air conditioning components were installed there. A Benrus watch was offered in the hub of the steering wheel.

The Belvedere was an extremely popular car with 762,231 cars being manufactured in the year 1957 itself. This helped the brand to move ahead of Buick and claim third position which it had usually occupied. However, in their hurry to launch a 1960 car in 1957 followed by the breakneck production to meet demand, Chrysler did not test the cars completely and quality was hit. Thus leading to a number of issues later, including leaky bodywork, torn upholstery, flaked paint etc. This image of poor quality cars went ahead to haunt Chrysler till the 1980s when Lee Iacocca turned around the company.