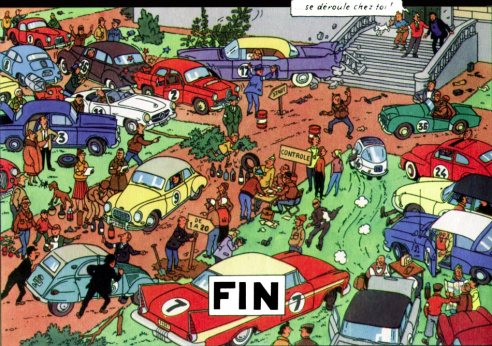 Today we come to the last car in the parking lot of the Vagabond Car Club Rally. Over the last few weeks I discussed about one after the other classics of today. Some of the most exotic as well as popular cars of the day. Hats off to Herge for making such a detailed frame in the book “The Red Sea Sharks”. I am sure all the cars selected to be drawn must have been curated with detailed consideration. The car we discuss today is a red fastback numbered 24, parked between the Citroen DS and Triumph TR3. This car is the Volvo PV 544.

The PV 444 followed by the 544 were near identical cars. These cars were manufactured from 1944 till 1966. The only visible difference between the PV 444 and PV 544 other than the badging was the replacement of two straight windscreens on the PV 444 with a single piece curved wind screen. Though there were many upgrades under the hood with larger engines and four speed gearbox replacing the smaller engines and three speed gearbox of the PV 444. These cars were offered only in one body shape and that was a two door fastback which could seat four people. The shortage of raw material and fuel during World War II made Volvo realise that the post war era would need a small and fuel efficient car which was robust. They designed and started manufacturing the PV 444 in 1944, but it was only in 1947 that the sales did pickup well.

This was Volvo’s first moncoque construction car. It was based on the Hanomag 1.3 litre from 1939. The Hanomag had been purchased and “studied” by engineers of Volvo. This car had more than double the fuel economy of an average American car of the era and the performance was also brisk. The added advantage of four seats won over many an American sports cars drivers who got the same driving pleasure but with an added advantage of carrying the whole family.

The PV 544 was actually introduced in 1958. In addition to the subtle difference between PV 444 and PV 544 discussed earlier, the PV 544 had a ribbon type speedometer which was in style at the time. It was probably the only modern styling element in a car that was still styled for the 1940s. This was also the first Volvo to be manufactured outside Sweden; in Canada. 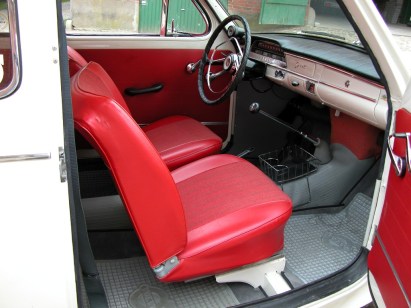 All this power and torque was transferred to the rear wheels using a four speed gearbox. The PV 544 measured 4,500 mm (177″) in length, 1,570 mm (61.8″) in width and 1,520 mm (59.8″) in height. The car weighed in at 972 kg (2,140 lbs). The front suspension was independent with coil springs, telescopic dampers, wishbones and anti-rollbar. The rear suspension comprised live axle, coil springs, telescopic dampers, torque arms and Panhard rod.

The PV 444/544 was a very successful car for Volvo, they sold around 440,000 cars during its lifetime. The cars were so popular and loved by their owners that Volvo had to give ads apologising for stopping production and replacing the car with the Volvo Amazon.